Show More +
You are here: Home

Renewable Energy
May I Help You?
Powered By ChronoForms - ChronoEngine.com

As India looks to meet its energy demand on its own, renewable energy is set to play an important role. It is expected that by the year 2040, around 49 per cent of the total electricity will be generated by the renewable energy, as more efficient batteries will be used to store electricity which will further cut the solar energy cost by 66 per cent as compared to the current cost. Use of renewables in place of coal will save India Rs 54,000 crore (US$ 8.43 billion) annually.

Electricity consumption in India is expected to rise in the years to come. The expected surge in consumption is most likely to be propelled by a growing economy, demographic expansion, urbanization accelerating the switch to modern fuels and the rise in appliance ownership (an additional 315 million people are expected to live in the country’s cities by 2040). Energy consumption per capita in India is still only one-third of the global average with some 240 million people having no access to electricity. These factors make the generation and use of renewable energy extremely crucial.

India accounts for approximately 4 per cent of the total global electricity generation and contributes 4.4 per cent to the global renewable generation capacity. India has the 4th largest wind power capacity in the world, after China, USA and Germany and the 6th largest solar power capacity in the world. The world’s largest ground based solar power and world’s largest rooftop solar plant are both located in India. 142,000 solar pumps have been installed in the country as on November 2017, including 131,000 installed during last three and half years. India has an estimated renewable energy potential of about 1096 GW from commercially exploitable sources viz. Wind – 302 GW (at 100-meter mast height); Small Hydro – 21 GW; Bio-energy – 25 GW; and 750 GW solar power, assuming 3 per cent wasteland.

India is the fourth largest importer of oil and the 15th largest importer of petroleum products and Liquefied Natural Gas (LNG) globally. The increased use of indigenous renewable resources is expected to reduce India’s dependence on expensive imported fossil fuels. Economic growth, increasing prosperity, a growing rate of urbanization and rising per capita energy consumption are some reasons which have led to increased demand for energy in the country.

The target of National Solar Mission has been up-scaled to 100 GW from 20 GW of grid connected solar power by 2022, which creates a positive environment among investors keen to tap into India’s renewable energy potential. Environment Program’s (UNEP) ‘Global Trends in Renewable Energy Investment 2016’ Report ranks India among the top ten countries in the world investing in renewable energy. The Government has set a target to achieve the proposed renewable energy capacity addition of 175 GW by 2022 – 100 GW being from Solar Power alone. The world’s largest solar park named ‘Shakti Sthala’ was launched in Karnataka in March 2018 with an investment of Rs 16,500 crore (US$ 2.55 billion).

The Government has revised its target of renewable energy capacity to 175 GW by end of 2022, making it the largest expansion in the world and providing plenty of opportunities for investors. The target capacity is as shown below: 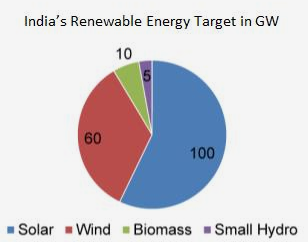 Foreign Direct Investment (FDI) up to 100% is permitted under the automatic route for renewable energy generation and distribution projects subject to provisions of The Electricity Act, 2003.

According to the Department of Industrial Policy and Promotion (DIPP), the non-conventional energy sector has received a total FDI equity inflow of US$ 6.39 billion between April 2000 and March 2018. The solar sector in India received investments of over US$ 10 billion in FY 2017.

Some initiatives by the Government of India to boost the Indian renewable energy sector are as follows:

Exim Bank has taken this initiative to add to the ongoing efforts towards reducing the asymmetry in information availability of trade finance and credit insurance facilities amongst MSME entrepreneurs. Though there are a few platforms which provide data and information to exporters/importers, this portal supplements export-import related data.